Ad blocker detected: Our website is made possible by displaying online advertisements to our visitors. Please consider supporting us by disabling your ad blocker on our website.
If you are having problems getting into your account, email me (isuquinndog@redbirdfan.net) from the email you signed up with and your username.

The place to talk everything else. NO POLITICS.
Post Reply
11 posts • Page 1 of 1

Just curious what other posters do to clean out the wax in their ears? What works for you? What's not so effective? I'm always looking for new techniques and thought I might tap into the collective wisdom of this fine forum.
Top

I recently read that ear wax can cause hearing AND memory loss. So this is a hot topic.
Top

Redbirdfan.net Koolaid Krew, Sgt at Arms
Premium Content Forum Moderator. PM if you are interested in being considered for admission
4 MORE YEARS!!!!
Top 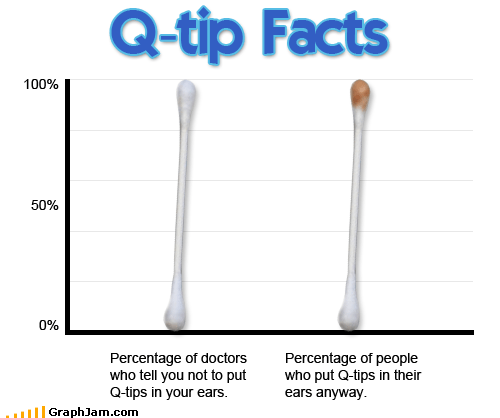 The FOE feature is easily accessible on the top line of your User Control Panel.

One step...have your medical professionals remove the wax each visit. AND if you have a crazy build up issue...then try and make the med professionals record and change your Ear Care to address the issue.

There is some type of "corkscrew" apparatus available that is advertised on the boobtube. I just have never found it at the store.

And TNX...it is nice to find a nice civil spot in this website to discuss matters of concern.
Top

Here are some great tips on ear wax blockage from the Mayo Clinic:

Per webmd symptoms of earwax impaction include:

Decreased hearing.
Dizziness.
Ear pain.
Plugged or fullness sensation.
Ringing in the ear.
Itching or drainage from the ear canal.

This is serious stuff!
Top

I read that in the middle ages that people would save their ear wax and use it as lip balm in the winter.
Yuck!!!
Top

One thing about Qtips. My daughter got a staff infection in her ear and the ear doctor guy blamed it on Qtips. Not saying, just saying.
The FOE feature is easily accessible on the top line of your User Control Panel.

TIMMY wrote: ↑
Fri Feb 07, 2020 5:03 pm
One thing about Qtips. My daughter got a staff infection in her ear and the ear doctor guy blamed it on Qtips. Not saying, just saying.

Earwax plug
Some people produce more earwax than others. It usually falls out of your ear gradually, in small pieces or flakes. However, in some cases earwax can build up, harden and form a blockage called a 'plug'.

If you have an earwax plug, it can cause slight discomfort and loss of hearing as your ear canal becomes blocked.

Hearing loss is often blamed on earwax but, in some cases, it may be caused by something else. However, if you have an excessive amount of earwax, any hearing impairment that you have may improve once the blockage is removed.

Discomfort and earache
As well as a physical feeling that something is blocking your ear, if you have a build-up of earwax, you may experience the following symptoms:

discomfort in your ear,
earache, tinnitus
: noises in your ear that come from an internal source,
itchiness, and vertigo
: the sensation that you are spinning even when you are standing still. Not all experts believe that earwax causes vertigo.
In rare cases, you may also have a cough that is caused by the stimulation of a nerve inside your ear. This occurs as the result of increased pressure created by the impacted earwax.

Return to “Off Topic”

Powered by phpBB™ • Design by PlanetStyles